Cupid.com  is a decade old online dating site that provides its users with easy signup, and pretty basic features. While membership is free, you won’t get very far unless you sign up with a premium membership. After signing up for Cupid.com, I quickly learned that it offers basic features that don’t really stand out from the rest. For those looking to up their chances with many different sites, however, it’s still worth a shot! 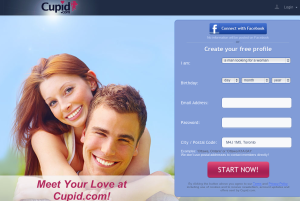 What we didn’t love

Premium membership at Cupid.com allows for instant messenger, text chat, and audio/chat, while free membership only allows sending out ‘winks,’ and responding to emails. The lack of free membership features is pretty disappointing.

And that’s a wrap

As a whole, it would seem that Cupid.com isn’t our favourite online dating site. We’re not saying it’s bad, we’re just saying you can probably do better. At the end of the day, a good dating site is one that has extremely high membership rates, lots of user involvement and dedication, and good free membership features. With that said, when you’re looking for love, romance, a date, or a fun, casual night, it’s important to maximize your options everywhere you can!